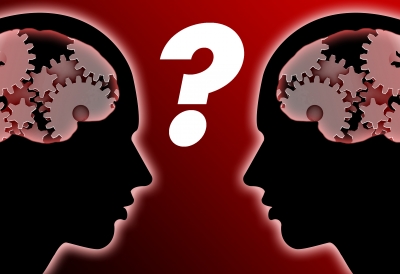 The Essence of Mind Games

For the longest time I found myself trying to guess at what was written between the lines. I wanted to find out what people really meant or felt or wanted. I didn’t take what people said at face value. Communication was ambiguous and murky.

We all know a person who communicates this way,or maybe we are that person. The person who says one thing and means another, and without even knowing it we play along; guessing at the hidden meanings and attempting to figure out the part we play in it. It’s exhausting mental gymnastics and it is not worth it.

Not only do we train people how to treat us but we train people how to interact with us. If we are constantly taking the bait and trying to figure out these hidden meanings in the communication of people who do not want to be straightforward, they will continue putting out these messages. Or if we happen to be the one who is on the other side, our behavior is reinforced by the others willingness to play along.

The Queen of Passive Aggression

Other ways this shows up in a more negative context is passive aggression. Oh, I used to be the queen of passive aggression. I just didn’t know how to communicate effectively. If I became angered at someone (which happened often in those days) I would hardly confront it unless it rose to an unhide-able level. At that time the confrontation wouldn’t be pretty, so that wasn’t a desired outcome.

I would just act out, saying things in tones, angrily shuffling papers, and conveying how I really felt in a sort of verbal hieroglyphics. In my mind I thought the receiver simply had to know what my real message was, I was being clear as day! If they didn’t understand, it was just more reason for me to be infuriated with their stupidity or worse yet, their complete lack of trying to understand what I was saying. They must be doing it on purpose!

As you can see that perspective is all kinds of messed up. But this, or some variation of it, is what goes on in those who want to be mind-read. The problem comes when we take on the role of the mind reader. We are setting ourselves up for all kinds of aerial flips and tight rope walks that’ll only end in a steep fall with no net. Ouch.

This is what we need to remember when interacting with people, friends, family, and strangers alike. We are constantly defining our boundaries without ever using that word. We do so in the subtlest of ways, our deepest intentions are felt, taken in and used in order to create the unique dynamic between two parties. Make sure you are defining the boundaries that make sense for you and serve you.

I decided that I wouldn’t be a mind reader. That I would not be responsible for what other people wanted me to think or feel. I would only act off of and respond to what they said to me directly. (This is an ideal, sometimes you may find yourself back in Mindreadersville, but correct course and stand firmly grounded in reality.) See this also gives the other person the opportunity to take responsibility for their communication. Most of us don’t even know we are doing it. If more people are intentional and present with how they interact with us, we are almost forced to do that same thing.

Decide how you want to interact with people. How do you find your interaction affects you and your relationships? Do they take away from or allow for authenticity? Are they clear or fuzzy? Are they a lot of emotional work or are they easy going? Do you feel connection or isolation? We have developed so many small habits and ways of doing things that we are not aware of. Sometimes, the sum of these habits seem to make up “the way I am”, but a change in the smallest of these mental habits can make the biggest difference.

0 likes
Prev post: Does Humanity Really Suck?Next post: Cognitive Bias of the Week – 1 Way the Anchoring Effect Could Be Costing You