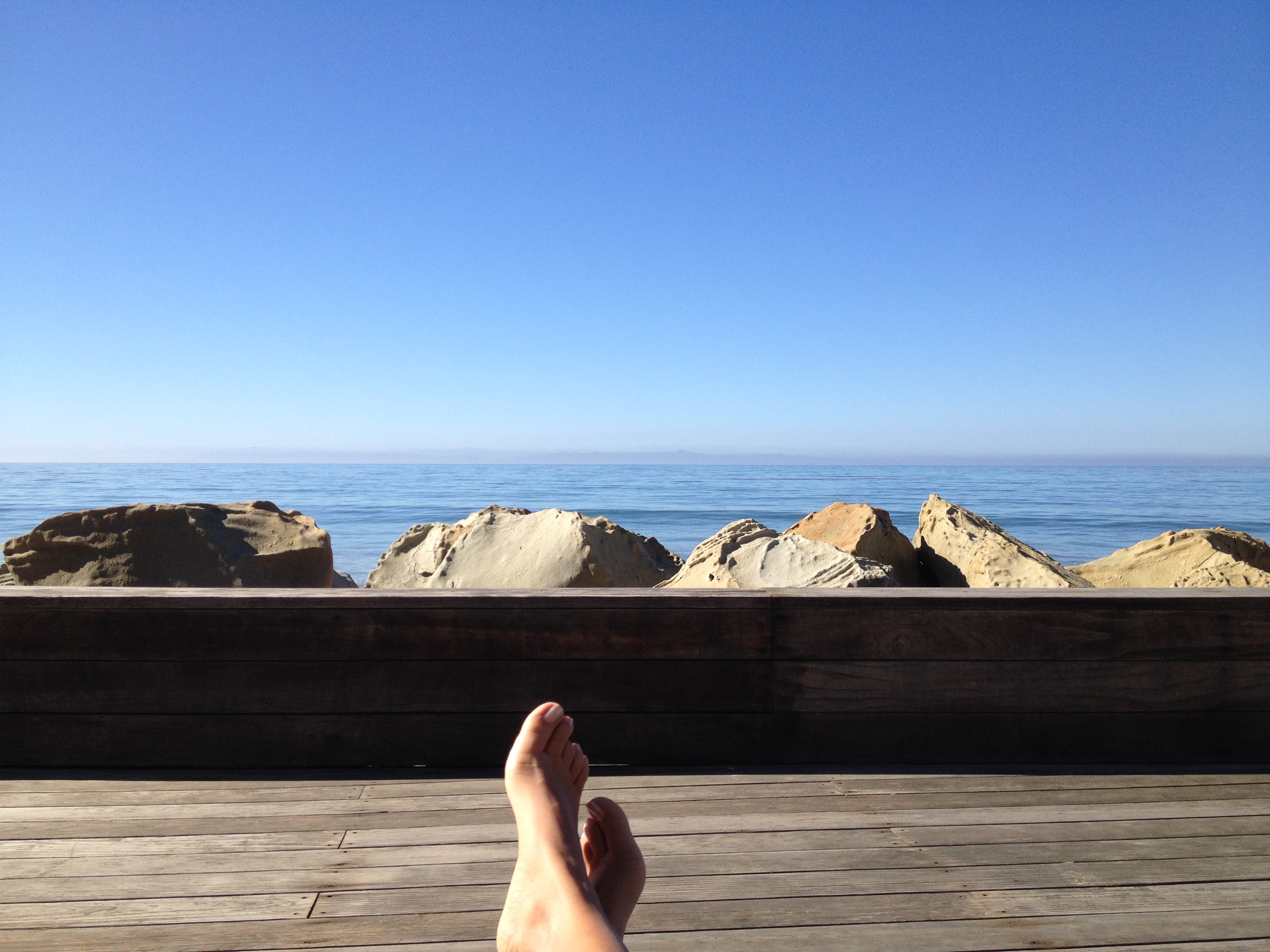 (This sat in my drafts for a few months, so it was really not this past weekend, but a weekend in November.)

This past weekend I learned and saw from very close up exactly how I got really sick, and how I got better in a matter of a couple of days. I want to share this with you in the hopes that it will help you get over anything you might have going on by looking in places that seem completely unrelated.

I was set to spend what was meant to be a wonderful weekend with Chrissy and her family at a lovely beach house in Ventura California to celebrate her Grandmother’s birthday.

The waves literally crashed against the walls of the outdoor area and the bedroom windows looked out on the beautiful Pacific Ocean and the small volcanic island of Anacapa. When you slept, you could hear the waves crashing, and when you awoke, the vast horizon stretched before you as if you were at sea. It was breathtakingly beautiful.

Now I will have to rewind a week here and say that in recent days, there were some family things going on and they really upset my emotional balance. I dealt with them, and moved on, or I thought I did anyway. Anyhow, that first night at the beach house I slept terribly, or I should say slept very little and the sleep I did get was pretty terrible. I still awoke early, determined to enjoy the beauty of the surroundings, soon realizing, I should have got some more sleep. On and on the day went forward, and I could not shake the tired, grumpy and negative feelings. Now this is opposite of how I generally feel and behave, it was uncharacteristic and I couldn’t figure what was up. Later that night, I checked my phone and received come bad news from family. I then spent the better part of the night dealing with these issues and becoming quite concerned and distraught over what was going on. Also, I began to feel very angry and bitter towards whatever my mind happened upon, people, and circumstances that I thought about, anything and everything. I began crying a lot and was comforted by Chrissy, and as she was comforting me, I felt my throat was swollen. It was as if, in that moment, my throat swelled up. I could literally feel the inflammation. I cried a lot more and eventually set to sleep. Again, I fell asleep late and woke up with an emotional hangover.

That next day I felt ill, the beginnings of a cold or flu. My entire throat was sore, as though I worked it out and it was recovering. My glands were swollen and I felt extremely tired. I don’t remember the last time I felt this way. Following were the days that express how important these three aspects of our lives are: stress/rest, nutrition, and emotional processing.

These are the points you “tap”.

The day after we returned home I was wiped out. I felt like I had been hit by a ton of bricks, picked up and hit again. Emotionally I was void, with nothing that could make me feel better. I called in to work and stayed home to rest up. I remembered what to do during a cold, neti pot, hot tea, bone broth, and plenty of fluids. This helped, but there was still something awry. I prepared for my evening mediation in a darkened living room – the sun had just set and it was newly evening. I closed my eyes for the twenty-minute meditation and began my state of deep rest. About 3/4’s the way through, I burst into tears. I remembered hearing my Transcendental Meditation teacher’s voice in my head, “Activity such as crying or laughter during meditation is a stress release, just go with it.” So with it I went. I cried probably for almost 5 minutes straight and I’m not talking about silent tears. I’m talking about the noisy crying, tears streaming as if there is no lack of them in my ducts. After the few minutes passed and the tears subsided. I came out of the meditation but felt there was still something underneath. I thought to myself that I needed more release so I began “tapping”. Tapping or EFT is technique used to clear out blockages by tapping on your energy meridians similar to acupuncture principles. I have experienced some success with it in the past, but have never really done it consistently. Anyhow, let me tell you, I did maybe 10 rounds and each time, I went deeper into what was going on with me, and sobbed uncontrollably. It was amazing, releasing all that energy.

I always marvel at how amazingly sophisticated our bodies are – a stress so intense it materializes into physical form in tears and leaves our body. How much more efficient can you get? Anyhow, I tapped until the tears did not come and I felt my flu symptoms were at least 40 per cent less than they were previous to my meditation and tapping. That is something you cannot buy over the counter. My throat felt so much better and the heaviness was gone. I spent the rest of the evening in good spirits and went back to work the next day.

It’s the triple whammy of lack of rest, terrible nutrition (I didn’t go into detail but during that day I ate a whole lot of processed and chemical foods that my body was not used to), and emotional strain that manifested quite instantly into a physical illness. Now if we blow this out to the chronic lack of rest, bad food (or food-like products) choices, and not dealing with our emotions, it is plain to see the dots connecting. That being said, what aspects of your life feel like they are out of alignment with optimal health, whether it be sleep, nutrition, emotional distress or any combination thereof, and how is it manifesting in your life? It’s worth checking out.